The Felt Friends live in the Felt Board on the living room wall. The two that appear the most are Fifi and Freddy, a pair of humanoid kids. Many other felt humans make guest appearances throughout the series, as well as felt animals.

They appear in almost every episode, most often in the background, doing something related to the topic of an episode. Sometimes, they need help from Steve or Joe, and in these cases, the host skidoos into the Felt Board and enters their felt world. They will usually need help in dealing with anything that has to do with shapes.

The most common Felt Friends are Fifi, who is aquamarine with a purple body, and Freddy, who is yellow with an orange body. Aside from having the same general head shape, face, and limbs, no two Felt Friends look exactly alike. Most of the named friends' names start with the letter F or the "Ph" sound. There are a few exceptions, like Diana Diamond, Cybil Circle, and Chris Crescent, who were named for their body shapes.

Most of the Felt Friends are are human-like characters made from geometric shapes. They all have circles for heads, rectangles for arms and legs, a red mouth, and a pair of black circles for eyes. The torso is a triangle for females and a square for males.

Steve with Freddy and Fifi from the episode Magenta Comes Over. 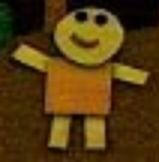 Steve with an unnamed sky blue felt friend with a green semi-circle body.

Steve and Blue with a felt friend with an "O" on her triangle shaped body.

Steve and Blue with Freddy and Fifi in episode The Grow Show.

Steve with Freddy and Fifi in Blue's Favorite Song. 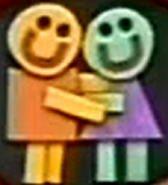 Add a photo to this gallery
Retrieved from "https://bluesclues.fandom.com/wiki/Felt_Friends?oldid=160303"
Community content is available under CC-BY-SA unless otherwise noted.