"Bugs!" (Portuguese)
Duarte is the host of As Pistas da Blue, the European Portuguese version of Blue's Clues. He performs the roles of both Steve and Joe, skipping the "Joe's Scrapbook" episode trilogy. Like Joe, he regularly changes shirts after season four.

Duarte is portrayed by Duarte Gomes, a well-known actor from Portugal. Not much is known about how he got the job for the show, or how the Portuguese crew was able to recreate it.

Duarte has fair skin and brown hair. Unlike the other hosts, his hair is long. He usually wears a variant of Steve's outfit: a green striped shirt with horizontal slats, gray pants, and black shoes. Unlike Steve, he, along with Kevin, does not wear a belt. 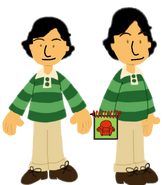