Dress Up Chest is a main character in Blue's Room. He is a large purple treasure chest who enjoys playing dress-up. Dress Up Chest often gives Blue and her friends clothes that fit the theme of the episode.

Dress Up Chest is mostly purple. He has a gold lock and two white eyes with black pupils. Two turquoise-white stripes with light purple spots run down the sides of the chest. 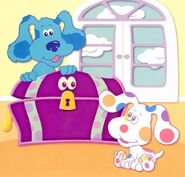