Who does Blue want to add to the Portrait of Pals?

The Color Blue
The Color Yellow
A Puppy

Can You Help? (Broadcast Order)
The Snack Chart (Production Order)
The Big Book About Us (Credit Order)

Blue and Joe are finger-painting in the backyard to make their Portrait of Pals! They need to mix the right colors to make orange for Orange Kitten, purple for Purple Kangaroo and magenta for Magenta! Who else does Blue want to paint in the portrait? As preschoolers learn about colors with Joe, they'll look for Blue's Clues to figure it out.

The Color Blue (US)

The Color Yellow (US) 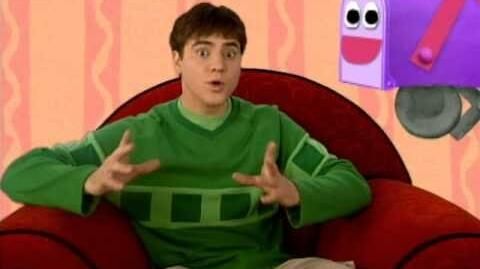