Blue's Clues Wiki
Register
Don't have an account?
Sign In
Advertisement
in: Objects, Other recurring characters, Birds,
and 8 more

Boris is Joe's stuffed duck doll. Boris is probably a handmade duck, considering his beanbag like appearance and buttons for eyes. He was made by Joe, but in Blue's First Holiday on the day we met Blue, he is right next to him as a baby. This means either the story about Joe having made Boris was retconned or he appeared with baby Joe as a matter of artistic license on the writers' part.

Boris is mostly golden yellow. He has an orange beak and orange feet. Boris has a pair of mismatched black buttons for eyes. He was handmade.

Boris has appeared in many episodes, mostly in Season 5 and 6. His debut was in Joe's First Day with Horace. His last appearance was in Sprinkles' Sleepover. He returns on Blue's Clues & You! in Bluestock. 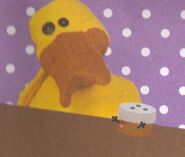 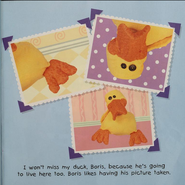 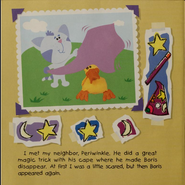 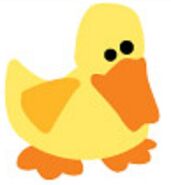 A cartoon depiction of Boris. This is how he'd appear in books based on the show.

Boris with the rubber duck and Goose. Seen in Animals in Our House? 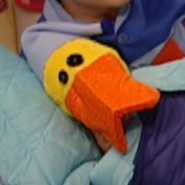 Boris in the Bluestock Remake