What feeling does Blue want to do in the feelings game?

Joe and Blue learn about different emotions and body language.

Can you make your body say happy? Joe and Blue are striking all sorts of poses in The Feelings Game, and they want us to play along. Along the way, we play Blue's Clues to figure out what feeling Blue wants to act out, And while looking for clues, We Help Periwinkle find the right pictures for his Storybook he made. and Later we Skidoo to a Shadow Theater to Help a Friend named Sal-a-sauce Direct a Shadow Play Too.

Frame is light yellow inside Yellow frame with Mr. Salt is excited face

Frame is now pink inside Yellow frame with Mr. Salt is scared face

The 3 "Talking" Clues From "Body Language" 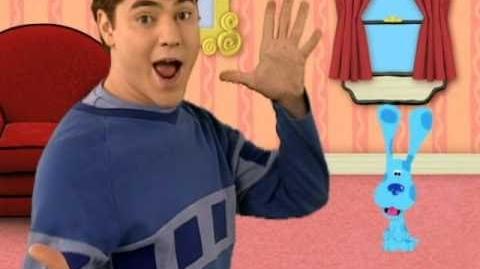