What song game does Blue want to play?

A Sun
Rain
A Spider

"What Does Blue Want to Make?" (Produced)
"Magenta Comes Over" (Released)
"Tickety's Favorite Nursery Rhyme" (Credit Order)
"Blue Wants to Play a Song Game" is the fourteenth episode of Blue's Clues from the first season.

"We play Blue's Clues to figure out which song game Blue wants to play. Along the way, we sing and complete the gestures with Steve and a Sock Monkey and play If You're Happy and You Know It with Tickety Tock. We also determine, through audio and visual elements, which sea creature is dancing to the rhythm of rain, wind, and waves."

Steve plays Blue's Clues to find out what song game Blue wants to play instead of Head, Shoulders, Knees, and Toes. Steve gets his notebook from Sidetable Drawer and explains one more time to the viewers on how Blue's Clues is played. After that, Steve pretends to be a giant as he looks for the first clue. Steve finds the first clue on the picture of a sun. Steve draws the first clue, a sun, in his notebook. After that, Steve, Blue, and Sock Monkey play "Two Little Monkeys On The Bed". Not long after that, Mailbox comes in with a song of his own. It was "If You're Happy and You Know It". After that, Steve reads the letter where a group of kids had a song game of their own. The actions were opening and closing their hands for the Blue's Clues signature move. The next one was Blue barking, the third one is about Tickety Tock telling the time and where Mailbox brings in the mail. After reading the letter, Steve was impressed with those action moves. Tickety's alarm bells sounded. Steve and Blue go into the bedroom. Tickety hums out the tune of "If You're Happy And You Know It", Tickety asks Steve "Did I hear you singing this song?" and Tickety hums out the same tune. Steve tells her that he and Mailbox were singing "If You're Happy and You Know It". Tickety tells Steve "That's my favorite song game". So, Tickety started by stamping her feet and then waving her arms. Steve adds a couple more movements like wiggling the ears, wagging the tail, and clapping the hands. Steve heard thunder. And the rain started to fall. Steve realized that "rain" was the second clue. He draws it in his notebook. After drawing the second clue. Steve and Blue Skidoo into the picture of a beach where they help out Crabs Dance to the Rhythm of the Rain, Octopi Dance to the Rhythm of the Wind, and Herons Dance to the Rhythm of the Waves. Then, Steve and the viewers dance to the Rhythm of the Rain, Rhythm of the Wind, and Rhythm of the Waves. After that, Steve finds the third clue on a spider. After drawing the third clue, he Skidoos back home with Blue and he sits in the thinking chair to put all the clues together. The clues were the sun, rain, and a spider. Steve thought it was "The Sunny Spider That Gets Caught in the Rain Song". But that was not it. The answer was "Itsy Bitsy Spider". Steve, Blue, Sock Monkey, Tickety, Crab, Octopus, Heron, and Spider got together to play the "Itsy Bitsy Spider" song game. After that, it becomes Steve's turn for a song. He tells Blue (after she reminds him about the "So Long Song"), "Now it is my turn to pick a song game". Finally, he sings the So Long Song and the episode ends. 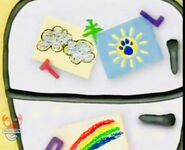 If you're happy and you know it waves your flag

Beach from Blue Wants to Play a Song Game!

Which one of these crabs is dancing to the rhythm of the rain?

Can you tell which octopus is dancing to the rhythm of the wind? 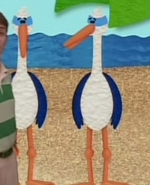 Which one of these herons is dancing to the rhythm of the waves? 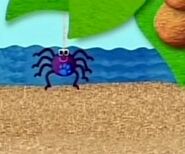 picture of Beach from Blue Wants To Play A Song Game 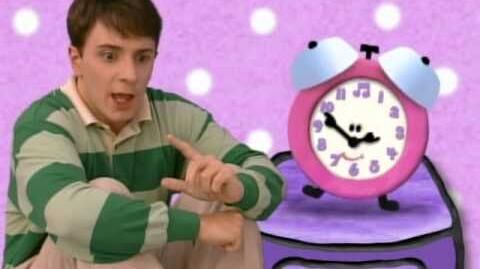