Blue Wants to Play a Game

"Blue Wants to Play a Game"

What game does Blue want to play?

A Duck
Another Duck
A Goose

"The Grow Show"
"Blue Wants to Play a Game" is the twelfth episode of Blue's Clues from the first season.

"Blue wants to play a game, and we play Blue's Clues to figure out which one. Along the way, we put together a jigsaw puzzle with Shovel and Pail, find Blue among other Blue objects, and remember our way to the gingerbread boy's house to play a game with him."

Today, all sorts of games are being played at the Blue's Clues house, starting with hide and seek. We help Steve find Blue and he would like to play again, but it would seem Blue does not want to play any more hide and seek. They play Blue's Clues to figure out what game Blue wanted to play instead of hide and seek. The first clue was a duck. Steve draws a duck as the first clue in his notebook. After that, they help Shovel and Pail with a jigsaw puzzle. Steve finds the second clue on a duck. Steve draws the duck on the next page in his notebook. Later, Steve and Blue had to find their way to Gingerbread Boy's house but forgot to bring the map, so they make up a tune to help him remember the places he and Blue had to go to reach the house. After finding the right places, they find Gingerbread Boy's house. After the visit, Steve had to find the third clue. He finds it on the goose. Steve draws the third clue, a goose in his notebook. He Skidoos back home and had to put all the clues together. Steve thought it was the duckity, duck, duck goose game. But the answer that Blue wanted to play was Duck, Duck, Goose. After figuring out Blue's Clues, they play the game. After that, Steve sings the So Long Song and the episode ends.

The First Clue (Duck [As real animals]). One of them has Blue's pawprint.

Steve has found the first clue. 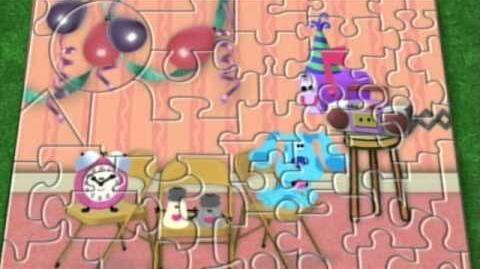