Blue Takes You to School

Blue Takes You to School

What is Blue's favorite part of school?

A Rug
Friends
A Circle

Blue's Show and Tell Surprise
Blue Takes You to School is the twenty-fifth episode of Blue's Clues from Season 5.

Periwinkle is ready for his first day of school. Once he gets there, he finds that he thinks that school is lots of fun. He takes part in activities such as circle time and painting time and even gets to feed Giggles, the class bunny. When it is time to go home, he likes school so much that he wants to play it as a game at home. And since the third clue was found on the way home, Joe figured out Blue's Clues and when playing school, they play the answer to Blue's Clues (Which is circle time).

The episode starts with Periwinkle, saying that it is his first day of school. He has his lunch box with him. After going through the door panel we see Joe (in his yellow shirt). Periwinkle already had breakfast. We then see Blue. We also then play Blue's Clues.

We go to Sidetable Drawer, and get our Notebook. After this, Joe finds the first clue (a rug).

After this, Periwinkle and Blue are off to school. There classmates besides them are Orange Kitten, Purple Kangaroo, Magenta, and Green Puppy. They had circle time.

After this, Periwinkle went to feed the bunny.

We then find the second clue (with Joe), Friends was a second clue (Just like A Brand New Game). We drew it in our Notebook.

Then it is time to go outside. Purple Kangaroo is the line leader.

It was then lunchtime. And Periwinkle ate his lunch.

After school, Joe brought Periwinkle and Blue to The Blue's Clues house. Beforehand, we see the third clue (A circle).

We then went to think about what is Blue's favorite part of the school. It was circle time.

Then we played circle time. Then the episode ends. 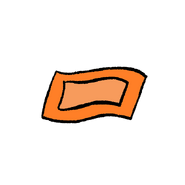 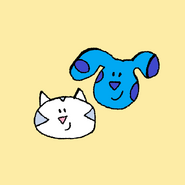 Blue brought her book to school, then left it there at the end of the day 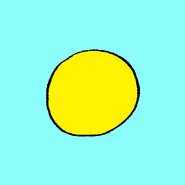 The characters from Blue's school start white. But...

...they to get colored in when the answer to Blue's Clues is revealed.

3 Clues From Blue Takes You To School

3 Clues from Blue Takes You To School 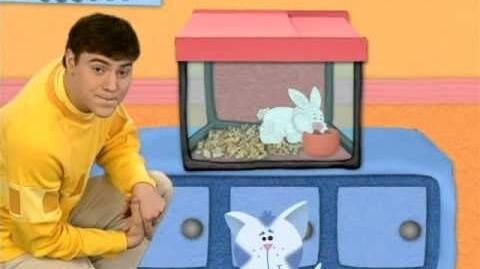