Why is Blue frustrated?

A Sink
Water
A Toothbrush

"What Is Blue Trying to Do?"
"Blue Is Frustrated" is the eighteenth episode of Blue's Clues from the second season. It was the thirty-eighth episode to be aired.

Steve and Blue teach the viewers what to do if they get frustrated.

Frustration happens to everyone, even characters in the Blue's Clues House, Fortunately, there is a way to deal with it, if you feel frustrated, the best thing to do is to stop, breathe, and think. Steve uses this idea when he has trouble keeping the picture by the Thinking Chair straight. This idea helps out Mr. Salt and Mrs. Pepper as well to make a cheese sandwich, celery with peanut butter and raisins, and cups for juice for the picnic. Later, we help out Rabbit who is frustrated about trying to balance things on a teeter-totter in US/Seesaw in the UK.

Steve trying to fix the picture.

Can you see the first clue in the UK dub?

This scene is from the Backstage at Blue's Clues

Let's hope Steve/Kevin/Duarte/HyunShup Shin can draw the 2nd clue with a crayon he just broke.

Steve & Mailbox with his green Letter

Steve is at it again when he draws the 3rd clue. 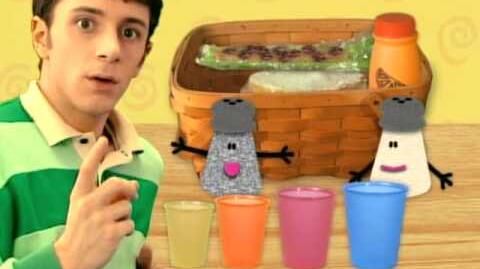