Blue Goes to the Doctor

Blue Goes to the Doctor

What does Blue want to do after her checkup?

Give Joe a checkup

Magenta's Case of the Giggles
Blue Goes to the Doctor is the 30th episode of Blue's Clues from Season 5.

Blue is going to the doctor. She is not sick, but she is getting a checkup and so Joe helps her gather the things she needs to get ready, including Polka Dots to hold on to in case she gets scared. The viewers play doctor and nurse with Shovel and Pail and later join Blue for her checkup. After her checkup, Blue has a special surprise for Joe.

Joe tells the viewer to find where the clue is.

Blue on the scale.

Blue gets ready to get a shot by the Doctor.

Joe is a clue! 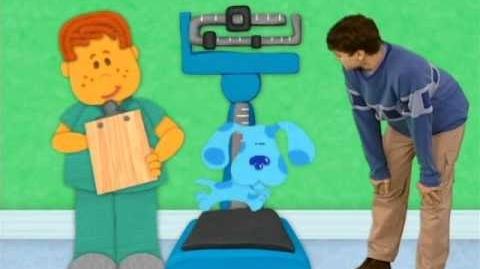