What is Blue's snowy day surprise?

A Blue's Clues Festival of Lights

Blue's Snowy Day Surprise is the fourth episode of season three and the forty-fourth episode overall in the reboot series Blue's Clues & You!. It is a new version of "A Snowy Day" and "Blue's Surprise at Two O'Clock".

There are SNOW many great things to do on a snowy day, but Blue's surprise may be the best! Josh and Blue play a wintry game of Blue's Clues to figure out what her surprise is. Along the way, they make shapes in the snow with their friends and sing a snow day song with Mo Snow.

It's a very snowy day and Blue has a surprise for Josh, but what is the surprise? With the help of the viewer, Josh plays Blue's Clues to figure it out along with a special notebook called the "Snotebook". After looking for different shapes in the snow, the first clue is a rectangle. Later Blue skidoos into a snowy world where Mo Snow resides. Josh comes along and they sing about where snow comes from. Finally, Josh sits in the snowy thinking chair, and realizes that Blue's surprise is to take him to go sledding down in the hill. After that, they go meet their friends in front of the Blue's Clues house, where Blue has another surprise: some hot cocoa. 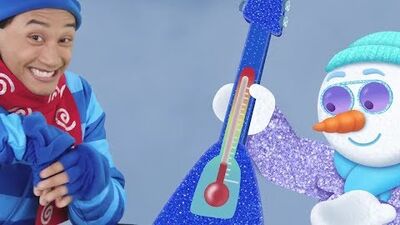