Why is Blue sad?

Sad Day with Blue
"Blue's Sad Day" is the fourteenth episode of Blue's Clues from Season 2. It was the thirty-first episode to air in the United States.

Steve and Blue invite viewers inside to learn about emotions and feelings. Blue is sad about something.

Blue is feeling sad. So they play Blue's Clues to figure it out. When Steve goes to get his notebook, he forgets to say "please" making Sidetable sad, so he tries again. He remembered "please" so Sidetable was happy to give Steve his notebook. After finding the first clue, Steve hears some noises. A felt girl is scaring a felt boy with a mask, but felt boy does not know how he is feeling so Steve asks the viewers who say that he is scared. After taking off the mask, felt boy gets mad and disappointed. The viewers say he is feeling mad. Felt girl, (who is feeling ashamed) apologizes for scaring him and that she was just playing. They hug and feel happy again. Felt girl blows a kiss at Steve to thank him for helping them out. Steve feels embarrassed. As he walks away, Blue is behind him, feeling sad. Steve asks Blue if she is still sad. After hearing the mail call, Blue cheers up. So they get the mail. Steve recaps that they get excited when it is mail time, and Mailbox says delivering the mail makes him feel proud. After reading the letter from their friends, Steve goes to look for more clues. He notices a drawing of a green puppy Blue did. The viewers point out that it is a clue, which Steve suddenly notices. After drawing the second clue, Blue pulls out her photo album from school and skidoos into it. Steve follows from behind. Steve sits down at the painting table and sees Orange Kitten painting a picture. The viewers point out that Orange is feeling happy, but then Green Kitten knocks over a glass of water all over the painting making Orange Kitten sad. Steve suggests that she either sits there and does nothing, or get another piece of paper and start over. The viewers say that starting over is a better idea. Then in a game of follow the leader, Pink Kangaroo accidentally pushes Blue Kitten, making her sad. Steve suggests that she either sits there on the floor, or tell her friend how she feels and play again. The viewers say talking about her feelings is a better idea. Then Purple Kangaroo reads a book which Green Puppy confiscates and reads on his own, making Purple Kangaroo upset. Steve suggests he asks Green Puppy not to take other things in use without asking, then read together, or just take the book back. The viewers say asking is a better idea. After finding the third clue, Steve skidoos back home to the thinking chair. He figures out that Blue built a block tower and Green Puppy knocked it over. After the game, The felt friends, Orange Kitten, and Purple Kangaroo come to help Blue with her problem. Green Puppy comes over with a flower to apologize to Blue. When they go to play with blocks, Blue builds a tower which Green Puppy knocks over like before, making Blue sad. After happening the third time, (counting the one before the game of Blue's Clues) Blue tells Green Puppy not to knock over her block tower, then gives half her blocks to him so that Blue can keep her block tower and Green can knock down his own all he wants. 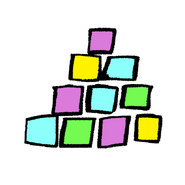 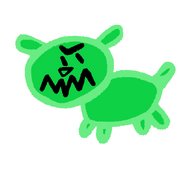 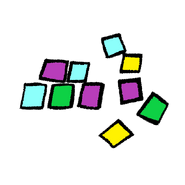 Fallen Down Tower of Blocks

Fallen Down Tower of Blocks 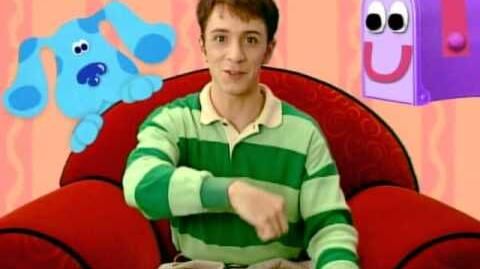 Retrieved from "https://bluesclues.fandom.com/wiki/Blue%27s_Sad_Day?oldid=160382"
Community content is available under CC-BY-SA unless otherwise noted.