What will Blue think it will happen on the patio?

A Stage
Periwinkle
A Wand

The Amazing Joshini
Blue's Predictions is the 15th episode of Blue's Clues from season five.

What predictions do Joe and Blue have to figure out? The viewers learn what will happen before it even happens.

When the viewers correctly predict that a bubble pops after Blue pokes it, Joe and Blue decide it would be fun to predict other things as well. Joe and Blue use observations and logic to figure out things that will happen. They watch a robot race that Paprika sets up and use what she tells them about the robots to guess which will cross the finish line first. In the Skidoo segment, Joe and Blue hop inside a storybook, where they predict what will happen in the story of Penguin Pierre, with the help of Bookmark to guide us along. 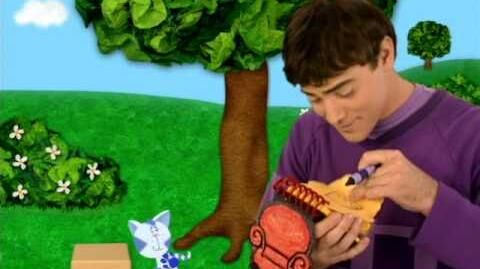