How should Steve and Blue's play end?

A Mouse
A Flower
A Happy Hippo

The mouse should give the flower to the hippo

Blue Makes a Movie with You!
"Blue's Play" is the 23rd episode of Blue's Clues from Season 3.

Steve and Blue act out a play about a mouse and a hippo living on a nearby farm. Their play is called "The Funny Farm", with Tickety as the narrator. They also figure out the emotions Mouse makes like happy, sad, and scared. They reveal the truth on the reason Hippo turned her head away from the mouse in a skidoo segment. Will Steve and Blue finish their play and will the Hippo go from being shy to being proud? 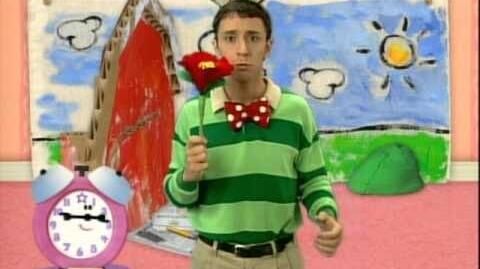