What does Blue want to tell us?

"Magenta Comes Over" (Produced)
"What Does Blue Want to Make?" (Released)
"What Is Blue Afraid Of?" (Credit Order)

"Steve Gets the Sniffles" (Produced)
"What Is Blue Afraid Of?" (Released)
"What Story Does Blue Want to Play?" (Credit Order)

Big News with Blue
"Blue's News" is the twentieth episode of Blue's Clues from the first season. It was the eighteenth episode aired in the United States.

"Blue has big news, and we play Blue's Clues to figure out what it is. First, we come upon Shovel and Pail and help them decide where to go next in their treasure hunt by making inferences with pictures. Next, we solve riddles with the Felt Friends. Finally, we actively create an environment as we deliver a message to Slippery's friend."

Steve welcomes the viewer. Blue sets up a game of Blue's Clues in which Steve will have to search for notes that will later lead him to clues. Steve understands the new method. After Steve hears Tickety, he walks into the bedroom and spots her on the chest. She gives him the first note in the form of a riddle. Tickety's riddle was: "Your first clue is in the room where you usually find a spoon.". Steve uses Tickety's note to find the first clue. Steve enters the kitchen and was not sure if he should look for a spoon.

As he does, Mr. Salt paces back and forth muttering to himself about spices. Steve told him that he was looking for a spoon and did not realize that Mr. Salt had a paw print on himself. When Steve got out a wooden spoon, he then realized that Mr. Salt has a paw print on him. When he finally found the spoon, he found out that Mr. Salt was the first clue. He draws Mr. Salt and asks the viewer "What could Blue be trying to tell them about Mr. Salt?". Mr. Salt then gives Steve another note leading to Shovel and Pail. We then play a treasure hunt game with them. The first hint was a bird + a house. When Bird + House was put together, it led them to the birdhouse. At the birdhouse, they find another hint. The hint was letters + a box. When Letters + Box was put together, the answer was Mailbox and went to Mailbox, who had a treasure box. When Steve opened the treasure box, treasure dust came out. Shovel and Pail told Steve to read the message inside. Steve did so and the riddle was: "Your second clue will make you sneeze and it's used in lots of recipes.". Steve gives the note to Shovel and Pail while he finds the second clue.

Steve thinks in his head about what the riddle told him. He then found the second clue on a picture of Mr. Salt and Mrs. Pepper (the paw print was on Mrs. Pepper's side of the picture) with the viewer's help. Mrs. Pepper was the second clue and the answer to the riddle because of the way pepper makes people sneeze and is used in recipes for cooking. Steve draws Mrs. Pepper. After Steve drew Mrs. Pepper, he reviews the two clues and wonders "What could Blue be telling Steve and the others with Mr. Salt and Mrs. Pepper?". Steve thinks in his head and then a sneeze was heard out of nowhere. Steve asks the viewer "Was that you sneezing?" and the The Viewer saying "No!" A felt friend was the one who was sneezing. The felt friend had some riddles.

The first riddle was: "What has a skinny tail, big ears, and weighs a ton?". The answer was an elephant. The second riddle was: "What is green and bumpy and tastes sour?". The answer was a pickle. After solving the felt friend's riddles, it was mail time. Then, Mailbox had another riddle for Steve. His riddle was, "Who wears a green striped shirt and looks for Blue's Clues all day?". Steve answered that it was him. Mailbox gives Steve the letter for answering correctly, after getting the mail, Steve open up the letter and it was a letter from our friend. A girl is drawing a story with markers about her news of her grandma bringing cookies to her house, then her grandma just bought her some cookies and milk. After reading the letter Steve closes the letter the opposite way and saw a picture of Slippery on the back of the letter.

Steve goes to him in the bathroom and Slippery asked him: "You figured out the big news yet?", and he slips. Slippery asked Steve to give a message to his friend who lives on a chalkboard. Slippery's message was: "Hi, I miss you, love Slippery". Then Steve goes to a chalkboard and saw Blue Skidoo into the chalkboard and then He skidooed into the chalkboard as well. Steve was amazed he was in a chalk world. He gets out a piece of yellow chalk and draws a pair of chalk birds. Next, he draws a river, but as the river starts to flow, he had to draw something to take him and Blue across it. The viewers told him to draw a boat and he draws one.

Steve staggers a little in the boat as it starts to float on its own and then Blue appears inside with him. Now, they had to go searching for Slippery's friend. Steve and Blue were not moving in the boat because they needed something to make the boat move, so Blue draws an oar so they can. After that, they were off to find Slippery's friend. Just then, a big chalk wave came their way. The viewers suggest that they move faster, Blue paddles the boat faster and Steve tries to blow the wave back, but nothing seemed to work. Since Steve and Blue were in Chalkworld, however, they can erase it, so Steve uses an eraser to erase the big wave. Steve was then relieved and puts the eraser down. After a while, a sentient chalk bubble floated past Blue and Steve, who thought he saw Slippery's friend.

When the bubble floated back to them, Steve asks him: "Oh, excuse me, are you Slippery's friend?" and he says "Yup, that's me.". With the viewer's help, Steve explained that he and Blue had a message for him from Slippery, and repeated the message Slippery told them to give. Slippery's friend replies, "Oh, thanks.", and asks: "Hey, are you Steve?", who replies yes. Slippery's friend had a message for Steve and Blue and says: "Your last clue holds a drink and is closer than you think.". Steve pictured the riddle in his head and said: "Well, thanks Slippery's friend." and then, they learned that his name was Sudsy as he left. After Blue draws the picture home, they both skidooed out of Chalkworld to find the third clue. They find it on a bottle, which answers the riddle because a bottle holds a drink. Steve draws the bottle in his notebook. and then he goes to the Thinking Chair and tries to put all three clues together.

Steve reviews the clues on Mr. Salt, Mrs. Pepper, and a bottle and is also trying to figure out what Blue could be telling Steve and the others. Steve thought they had a new bottle but that was not the answer. He looks at the clues again and finally figures out what the clues mean: Mr. Salt and Mrs. Pepper were having a baby. The characters head to the kitchen and spot Mr. Salt and Mrs. Pepper with a baby in their hands. The two new parents name their new baby daughter Paprika and Steve tickles Paprika under the chin. As the rest of the cast join them, Blue gives Paprika a picture, welcoming her to their family. Steve sings The So Long Song and the episode ends. 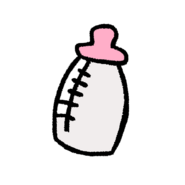 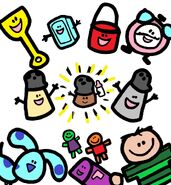 Blue's note for you Paprika 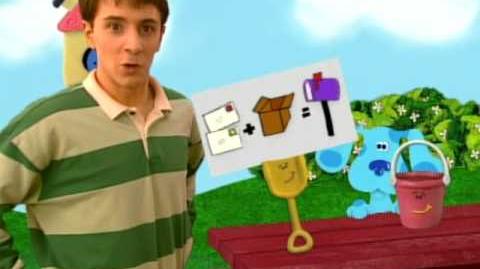