What's inside in the Mystery Present?

Blue's Mystery Present is an upcoming episode of the third season of Blue's Clues & You!. It is initially released in the UK on October 27, 2021. Its US release date is TBA 2022. It is a new version of "What's Inside?".

Joe's running a special contest - whoever correctly guesses the mystery present on display gets to unwrap it! What could be inside this super special gift? 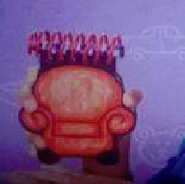