What is missing from Blue's circle collection?

A Red Stripe
A Blue Star
A Bouncing Motion

Steve and Blue start a collection of their own things.

Collections are the order of the day. Steve invites us in to see Blue's collection of circles. It turns out that she got the idea from her circular shaped spots. She has all sorts of different things that are either circular or covered with circular spots. Steve has a collection too. His collection is filled with things that are striped. It came from his wearing striped shirts, which came from his grandma, who gave him his first-ever striped shirt.

We come across Periwinkle, who it turns out has several collections. Using associations, we help Periwinkle to restore things that are missing from his collection of things that roll, things that remind him of the city and magical things. Later, we're called by Shovel and Pail. Pail has a great collection of leaves, including a very big brand-new one, but Shovel can't find any seashells in the backyard and that's a problem if you're trying to collect seashells. So we skidoo into a beach and there we're able to find a giant oyster shell, a conch shell, and a clamshell. 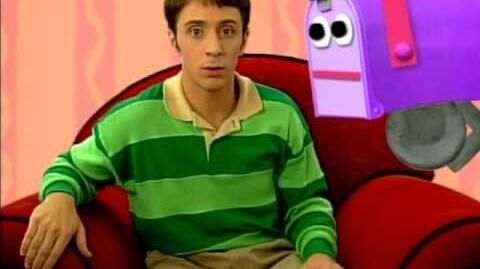