What does Blue want for her birthday present?

The Color Green
A Tank
A Shell

"What Does Blue Want to Do with Her Picture?" (Produced/Credit Order)
"What Was Blue's Dream About?" (Aired)

Happy Birthday Blue
"Blue's Birthday" is the ninth episode of Blue's Clues from the second season. It was the twenty-ninth episode to be produced and the twenty-seventh to be aired.

Steve is hosting a birthday party for Blue. The celebrities are giving Blue birthday wishes.

Steve welcomes the viewers and says that they are the first guests for Blue's birthday party. He says that the viewers are early and, since they are, he wants to ask for help in getting things ready for the party and playing Blue's Clues to find out what Blue wants for her birthday. They agree and help out with the special dance for Blue. Sidetable Drawer was so excited for Blue's Birthday Party. As Sidetable Drawer opens up her drawer, confetti sprinkles out. Steve had a birthday notebook for a birthday game of Blue's Clues. Steve explains how to play Blue's Clues to the viewers. Soon after, Steve heads into the kitchen. He spots some cupcakes with blue frosting and sprinkles that Mr. Salt and Mrs. Pepper just made. But, one of the cupcakes had no sprinkles. "Forgotten sprinkles", they both said. "Where?" they both asked. They find out which cupcake needed sprinkles. Mr. Salt and Mrs. Pepper are so excited about Blue's Birthday and so was Steve. Steve heads outside and saw the backyard decorated. Steve comes across an invitation on the path. Later, they find the first clue, which is the color green. Steve gets out of his notebook. But because this was a colored clue, he needed a green crayon. Steve draws the first clue. But he needed two more clues. Soon after, Steve helps out by fixing more things that are out of place. They complete a set of balloons that were missing one and place a missing napkin on a table. Steve then Skidoos alone to the present store and picks out gifts for Blue, they buy her a stuffed blue puppy and Steve buys her a turquoise turtle. The cash register names the turtle "Turquoise". They skidoo home and find the second clue, a tank. So far, Steve had two clues. The color green and a tank. Gingerbread Boy arrives for Blue's Birthday Party and joins in on some party games. In the mail-time segment, Blue gets a birthday card from several special guests wishing Blue a happy birthday. There was Gloria Estefan, Melissa Joan Hart, the Season 2 cast of "The Wubbulous World of Dr. Seuss", Whoopi Goldberg, Tia, and Tamera Mowry, Amanda Bynes, and Michelle Trachtenberg, and finally Rosie O'Donnell. Baby Bear shows up next to Blue's Birthday Party. Then, many characters watch as Blue unwraps her presents, each of which matches the personalities of the friend that gave them to her. Slippery Soap gave Blue a bottle of bubbles. Gingerbread Boy gave Blue a gingerbread house. Tickety Tock gave Blue a clock puzzle. The viewers gave Blue the blue spotted-you puppy. Shovel and Pail gave Blue some flowers from the garden. Baby Bear wrote a book all by himself. Magenta arrives at the door. As she walked in, a shell falls on the floor which was the last clue. After the last clue, a shell, Steve goes to tell Blue. Just as Steve heads back outside, Blue opens Magenta's gift. Steve remembered that they took the picture when Magenta came over to play. Steve had some good news to tell Blue. He found all 3 clues. So, Steve and Blue head inside to the thinking chair. Steve sits down in the thinking chair and tries to figure out what Blue wants for her birthday present. The clues were the color green, a tank, and a shell. Steve realized that Blue wanted a turtle for her birthday. Steve stands up but the music doesn't play just yet. Steve whispers to the viewers up close that a turtle was what he bought at the present store. So, Steve tells Blue that they figured out Blue's Clues and confetti rains down on top of them. Blue opens Steve's present and finds the pet turtle from the present store. Steve tells Blue it was a special green turtle with a blue-spotted shell. Steve told Blue that her name is Turquoise. "Happy Birthday Blue, I love you", Steve tells Blue as she licks Steve. Blue then plays a brief round of Pin the flag on Mailbox before the birthday cake is delivered. The cast sings the Birthday Song. Soon after, Blue and Steve blow out the candles. Steve chuckles and then, thanks to the viewers, sings the ‘So Long Song’ and the episode ends.

The viewers are greeted by three young children who are getting ready to watch Blue's Clues. Steve is on the television trying to make up a birthday dance for Blue but he had a little trouble. Steve tries a birthday dance on the children watching him on TV. Steve was not doing so well. Then, he heard Blue who is still sleeping. Blue was going to wake up soon and today was her big birthday party and so much has to be done. Gifts have to be wrapped, streamers have to be strung, balloons have to be hung, party hats to make, birthday food has to be made and lots of Blue's friends are coming over. And Steve still has to make up a birthday dance for Blue. Steve asks the children, "Do you know a birthday dance?" and the children respond to him "the birthday candle dance". The children said that they will teach Steve how to do it but he has to skidoo to see them. Steve Skidoos is so glad the children invited him over so that he could learn the birthday candle dance. The only downside is, that he does not have a lot of time and Blue's party is today. Steve talks to Timely and asks him how much time he has before Blue's birthday party because he still has to learn the birthday candle dance. One of the three kids tells Steve that the clock does not talk. Steve can prove it to them. The kids wanted to see for themselves. Steve and the kids watch and wait. In a few seconds, eyes appeared. The kids gasp and then a mouth appears. The kids laughed. Timely greets the kids and Steve. "Steve! Blue's birthday party starts soon. You need to be back when both my hands are on the number 12. That means noon. You don't have much time," says Timely. Steve only has ten minutes to learn the birthday candle dance. Steve sits down on the floor as he watches the kids how the birthday candle dance goes. Steve watched them do it with and without the music. Then, Steve had to try it. Steve remembers the words but he had to learn the right movements. He had to put one foot out, and bring it in, but the opposite foot out and bring it in. Then he had to jump and point at the same time. Next, he had to take three steps forward while bringing his arms out. The next move is to stick out the thumbs. The next move is to step back three times and roll the hands. Then, he had to do the twist to the left side, the right side, and then twist to left. But Steve also had to go down while he is twisting. So, all he had to do was just bend his knees. The last move is that Steve had to stand up straight and tall and bring his hands up over his head to make a candle. The last part is that Steve has to imagine himself being blown out just like a real candle. So, he just has to touch the ground with his hands. When Steve finally got the right movements, he joined the kids in the dance and they succeeded. Timely tells Steve "It's almost time for Blue's birthday party. It's time to Skidoo!" Steve saw that it was almost noon. Steve had to skidoo back to the TV. Steve says goodbye to Timely and Timely tells him, "Have a great 'time'" and giggles. As Steve Skidoos back into the tv, the episode starts.

After Blue blows out the candles, Blue leaves the table and is nowhere to be found, so Steve heads inside the house to try to find her. He thinks he has found her behind Sidetable as he sees the party hat she was wearing. But it turns out to be a part of the decoration, and this huge "thinking chair swirled red" present appears, and it is for Steve. Steve denies that it is for him since it is not his birthday, but the children persuade him to open the present to find a large "bedroom polka-dotted purple" present, which turns out to be a medium "kitchen swirled yellow" present, which then turns out to be a small "Steve striped green" present. Inside, it is a heart shape cookie that says "Thank You" on it. Blue had made it for Steve as a way of saying thanks for the party. They get back outside to the party and the episode ends with the so long song and credits on the banner.

One of these cupcakes doesn't have sprinkles. 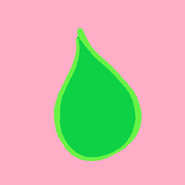 Mrs. Pepper can be seen before she and Mr. Salt bring the cupcakes in

A boom mic was seen on the top of the screen 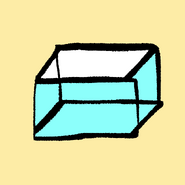 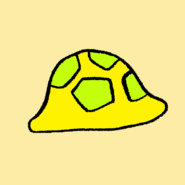 Blue opens Magenta's gift. Steve remembered that they took the picture when Magenta came over to play.

From the DVD release of Blue's Biggest Stories 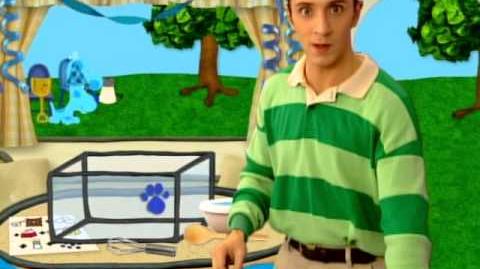