Who is the mystery builder?

Mystery of the Missing Pies
The Ghost of the Living Room
"Blue's Big Mystery" is the 21st episode of Blue's Clues from the third season.

There is somebody building a fort in the backyard of the Blue's Clues house, but they have no idea who it is. So they put on their detective caps to find it out! There is a mystery to be solved. Come along as they investigate, with a little help from Mr. Salt and all of their friends.

Steve invites the viewers inside, saying that something very mysterious happened. Steve reviews what happened in a black and white flashback sequence in which he and Blue were outside playing Kick the Ball when Blue kicked the ball really hard, it flew past a stone wall and he decided to go get it. Once there, he found a cardboard box and a stack of logs, it looks like someone has been building a fort in the backyard, but he has no idea who built it. He did not build it, and Blue didn't, either. He wonders if the viewers built it, but the viewers said that they did not build that fort in the backyard. So it's a mystery, one that they want to solve. Blue leaves her paw-print on the screen saying they should play Blue's Clues. and be detectives and search around for clues to help them figure out the answer to this big mystery. After Steve brushed up on the rules for the game, the paw-print tip-toed and Steve was in shock and asked the viewers where the paw-print went. The viewers saw the paw-print went to the left of the screen and vanished leaving little marks behind on the screen but eventually they disappeared soon after.

Steve goes to Sidetable to get his notebook. Sidetable spoke in a Sherlock Holmes accent and hands Steve his notebook so he can draw out the clues to their big mystery. They follow a tip from Mr. Salt during the mysterious builder hunting season and find a leaf. Using logic and observation, they match it to the proper tree that it came from and choosing a narrowing set of trees. After figuring out what tree the brown maple leaf came from, Steve finds a clue on footprints with four toes. After drawing the first clue, Blue comes in and Steve tells her that he and the viewers found the first clue. The footprints that Steve drew were not Blue's footprints. Steve knew that the clue is like evidence. And because the first clue was footprints, that meant the mystery builder has to have feet. Blue did not know the answer and then Steve decides to follow the footprints and see if he and the viewers can figure out the feet that made them. The footprints stopped by the garden, Pail was watering the garden. Steve hides behind the tree and peeks out and he realized that Pail did not make those footprints. So, they looked somewhere else. Gopher poked his head up from the ground and disappears underneath. Steve and Blue find Tickety who does so have feet. She was doing a jigsaw puzzle and when she was finished, they wanted to talk to Tickety on some evidence. Steve and Blue wanted to be sure that Tickety has feet and she does. So, Tickety was instructed by Steve to make footprints in the dirt. After that, the viewers figured out that Tickety's footprints were a different shape from the ones left by the mystery builder. It did not match the evidence and Steve and Blue thanked Tickety for their cooperation.

Then it was Mailtime. They sing the Mail time song and then Mailbox came inside with a disguise. Mailbox whispers to Steve that he has something for him. It was a mystery letter. Steve gets the mystery letter and when he opened it, there was a leaf inside which looked just like the one he saw and found before. Shovel calls Steve to take a look at the fort outside. Steve did so and Pail tells Steve the fort was growing. There was a roof put on top of the cardboard fort which had leaves that looked a lot like what Steve has in his hand. Steve thought the mystery builder has struck again. Soon after, a paw-print appears behind the bushes. It disappears, then it reappears and gets away. Steve did not see it and asked the viewers where the clue went. The viewers call out "left" and Steve said "follow that clue!" Now, they find signs of activity at the house next door to the Blue's Clues house. Could somebody be moving in? Steve thought the second clue had to be by the house next door. The clue appears and disappears and different spots and Steve was just not quick enough to see it. Steve still had to draw the second clue but did not know what the second clue was. The viewers remembered that it was a tail. Steve gets the notebook out and was about to draw the clue when he realized that he did not see the tail. How can he draw something he did not see? Steve asks the viewers if it was a straight tail or a curvy tail. The viewers saw a curvy tail. Steve needed a little more info and asks if it was bushy or skinny. The viewers saw that it was a skinny tail. Now that Steve had enough info, he carefully draws a curvy, skinny tail. He shows the viewers the second clue. Steve was struggling to figure out who the mystery builder could be.

Now that they know what they are looking for, they head outside once more and find the kitten. It takes Steve and Blue a minute to find him, but once they do, Steve asks him for his name. He asks for their names and they tell him and he introduces himself as Periwinkle. It turns out he has moved in next door and has been building his fort outside, not knowing anything about his new neighbors. Mr. Salt takes a picture of him and Blue. Mr. Salt welcomes Periwinkle into their neighborhood and gives the picture of himself with Blue. After that, Steve sings the "So Long Song" and the episode ends outside with Periwinkle and Blue in the cardboard fort.

Blue is hiding behind the leaves

Apple Trees, Maple Trees, Ever Green Trees. Which one is maple leaf came from?

Matcing Maple Trees. Which one is maple leaf came from?

Matcing Maple Brown Trees. Which one is maple leaf came from? 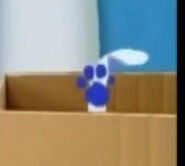 Steve drew the second clue with looking at it

from the Portuguese version.

From the VHS release of Playtime with Periwinkle 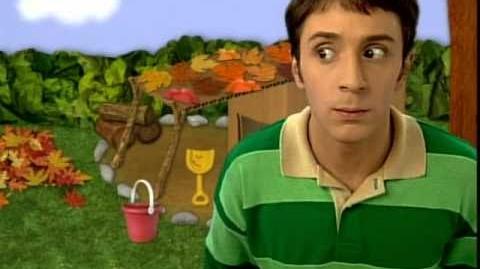