Get to Know Joe!

Shapes and Colors!
Blue's Big Band is a Blue's Clues VHS tape and DVD featuring two episodes from its 5th season. The DVD features episodes from the VHS release of Rhythm and Blue as a bonus. 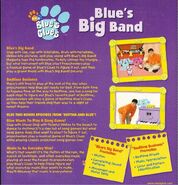 Add a photo to this gallery
Retrieved from "https://bluesclues.fandom.com/wiki/Blue%27s_Big_Band_(home_media)?oldid=119673"
Community content is available under CC-BY-SA unless otherwise noted.