What book does Blue want to read?

A Moon
A Cow
The word "Jump"

"What Was Blue's Dream About?" (Produced/Credit Order)
"What Does Blue Want to Build?" (Released)

ABC's with Blue
"Blue's ABCs" (also known as "Prereading!" in ABC's and 123's) is the seventh episode of Blue's Clues from the second season. It was the twenty-second episode to air and the twenty-seventh produced.

Steve and Blue are having reading time.

As we head inside to visit Steve, he is reading a chapter book named "A Really Great Book". When Steve heads into the bedroom, his name is seen on the back of his green striped shirt. Blue wants Steve to read her a book based on Twinkle Twinkle Little Star. After reading, Blue refuses to read Steve's book, so he asks what other books should Blue read. So Steve has to play a game of Blue's Clues to figure it out. Steve draws a "P" on the paw-print and it popped off the screen. Steve goes to Sidetable Drawer to get his notebook. After getting his notebook, the word "Notebook" is seen on the back.

During the song about how to play the game, he reads the book he was reading earlier. So after singing, Steve starts to look for clues. He finds the first clue on a picture of a moon in a different book, so Steve draws it in his handy-dandy notebook. Later, he heads into the kitchen. Mrs. Pepper asks Steve to assist her and Mr. Salt with their grocery shopping. Paprika is thirsty. They find milk, bread, and juice for Paprika. Paprika has some juice from a baby bottle. Steve waves goodbye to Mr. Salt, Mrs. Pepper, and Paprika. Steve tells the viewers that "Book" starts with "B". Door starts with a "D". Curtain starts with "C". Steve finds another "C" word, "Cow". As Steve starts to say C words like cake, caterpillar, carburetor, cantaloupe, and Capobianco, he finds the second clue in a picture of a cow. So he draws it in his notebook. During the Mailtime segment, Steve gets the viewers to read the words in the mail-time song. Mailbox comes in and spells Steve's name. Mailbox has lots of letters for him as in "letters of the alphabet".

Mailbox had another kind of letter. Inside the video letter, two girls visit the library and read a book called If You Give Your Mouse a Cookie. After that, Steve gets back to the bedroom, but not before questioning the viewers if they've seen Blue, who was hiding behind the bookshelf and eventually comes out from behind it. Blue and Steve immediately skidoo into a storybook, where they have to rearrange the mistakes so that the sentences in the book will make sense. Afterward, the final clue is on the word "Jump". Steve writes the word in his notebook. So Blue and him skidoo back home. After sitting in the thinking chair, he puts the three clues he found together. Steve wants to know if the moon could jump, but that answer is weird because the moon cannot jump. But the cow could jump.

The kids study the three clues and the answer is revealed to be the story "Hey Diddle Diddle" because Blue wants to read it. Then, they head back into the bedroom, with Steve carrying Blue's book, which is "Hey Diddle Diddle". He says that the illustrated picture from the story is good clues, which are a moon, a cow, and the word Jump. As Steve reads the story to his Mr. Salt, Mrs. Pepper & friends, the cat plays a fiddle. Then a cow jumps high enough to the moon. Also, the little dog laughs so he could see such a sport, and at the end of the story, the dish and spoon ran away. As Steve sings So Long, subtitles of the lyrics are seen as Blue's Ball bounces as Steve sings the lyrics. After singing, he catches the small ball in his pants pocket as the episode ends. 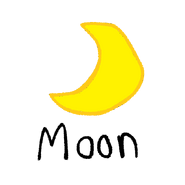 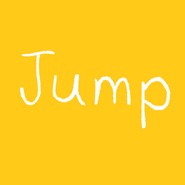 Steve: Steve, That's me. Hi, Mailbox, and could I get a letter for us.

Mailbox: I got lots of letters for you.

(Steve getting letters out from Mailbox)

Steve: Oh, letters of the alphabet, I get it.

Mailbox: And here's another one.

(Steve getting the letter out from Mailbox again)

Steve: Ha-hee. He did that funny don't you think. 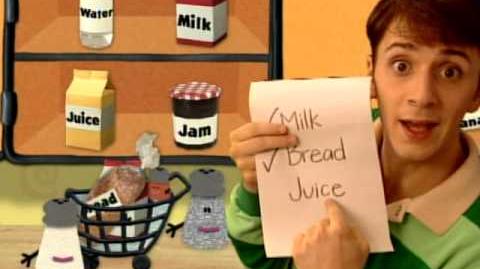 This episode had many video releases, including the following: