What is Blue's favorite part of bedtime?

A Mirror
A Sink
A Toothbrush

The Boat Float (Broadcast/Credit Order)
Up, Down, All Around! (Production Order)

Sleepy Singalong with Blue
Bedtime Business is the 14th episode of Blue's Clues from season 5.

We have come to the Blue's Clues house at night and so we help Joe and Blue with their bedtime routine, their bedtime business. We watch as Joe tucks in Boris and then learn about important pre-sleepytime activities. The characters have a small clothing crisis, but with our help in identifying clothing through features such as spots and stripes, the problem is solved. We also help out with washing up, reading a story and more.

Day becomes night in the Blue's Clues House. We have came to see Joe and Blue, and Joe walks us into the bedroom to put Boris to bed then Joe asks what is your favorite part of bedtime and Joe plays "Blue's Clues" Joe and Blue teaches the viewers bedtime routines, Joe draws the first clue, a mirror, and so they go to the bathroom to give Blue a bubble bath with Slippery Soap and the Bubbly Bubble singers. Then we pick the right pajamas for Tickety, Shovel, and Pail. Then after Joe draws the second clue, a sink, it was finally Mailtime, in the Mailtime video letter segment, we see a variant of The Bedtime Business Song. Then, someone dropped the toothbrush which is the third clue, then Joe realized he was already on the Thinking Chair. He puts all the clues together, and Brushing Blue's Teeth was the answer to Blue's Clues. We then brush teeths with Slippery Soap featuring a song called the "Toothbrush Tango". We then read a book to Blue called "Bedtime Business". The episode ends and everyone got ready for bed with a quiet Goodbye Song, then the Blue's Clues house gets dark, after they finally went to sleep, the episode concludes with a piece of lullaby music in the credits.

"Pajama time! From my head to my toes in my nighttime clothes!" 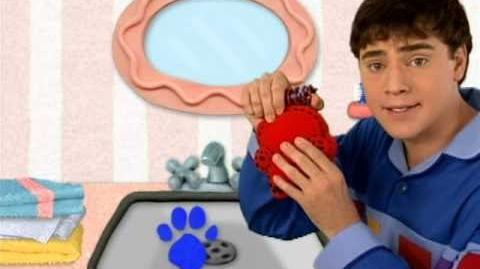