What does Blue want to make for the art show?

Weight and Balance
"Art Appreciation" is the second episode of Blue's Clues from Season 3. It was the forty-first episode to be produced and the forty-second to air.

Steve and Blue make and check out some artistic pictures.

Steve and Blue are making some art for the art show. Steve makes a picture for the viewer but Blue wanted to makes something different. They play a game of Blue's Clues to figure it out. Steve goes to Sidetable Drawer who made a tassel. Steve gets his notebook. Then, he starts looking for those clues. Steve shows the viewers the caterpillar. It was made out of an egg carton, pipe-cleaners, and had googly eyes. He finds the first clue on the pie plate. After drawing the first clue, Steve checks out more paintings starting with Tickety who made a finger painting. In her finger painting, there was a fish. Steve checks on Slippery Soap next. In Slippery's painting, he also had a fish in his painting that had some green and blue. And third, Steve checks on Phaedrus who made a mosaic. Phaedrus' mosaic had a fish on it as well. Mr. Salt, Mrs. Pepper, and Paprika were making a sculpture of their own. They tell Steve that they cannot see it until the art show. Soon after, Steve finds the second clue on the string. After drawing the second clue, Steve heads outside to see Shovel and Pail who made a clay sculpture of a dog. At first, the viewers thought the dog was sad but then again Shovel and Pail had a different answer. It was sniffing around looking for something. Steve asks Shovel and Pail what he was looking for. They tell him that their dog sculpture was looking for clues. Then it was Mail time. Mailbox did a painting on his side. Steve gets a real fancy letter. In the letter there were some kids at a museum. They admire the statue from the outside and gave their opinion on it. After reading the letter, three of the art characters fall out of the artbook. There was Rain Girl, Shape Boy, and Line Man. Blue leads the characters back into the artbook. Steve skidoos and realizes that he skidooed into an art museum. They begin by helping Rain Girl find her painting. The painting that the Rain Girl belonged in was called Umbrellas by Renoir. Steve helps Shape Boy find his painting. The painting he belonged in was called Oriental Promenade by Paul Klee. All is left was Line Man. They find his home called Waiting by Diana Ong. All the painted characters are back where they belong. Steve find the third clue on three spoons that were part of a sculpture. He draws the third clue and then skidoos home to the thinking chair to put all three clues together. The clues were a pie plate, a string, and spoons. Steve thought Blue would tie the spoons on one end and tie the other end to the pie plate and then the spoons hang over the pie plate and if the spoons bumped into themselves, it would make a pretty sound. Steve believes Blue is making a wind chime for the art show. After figuring out Blue's Clues, everybody gets together for the art show. Mr. Salt, Mrs. Pepper, and Paprika have finished their artwork and is now going to unveil it. It was a food sculpture. It had celery for the head and neck, carrots for the arms and the leafy part of the carrots were used for the hands, peanuts for the feet, a semi-circle shaped tomato for the mouth, and a whole orange for the body. Soon after, Blue was finished making the wind chime and hangs it up on a tree branch. Steve sings the So Long Song and the episode ends.

From the UK Version. 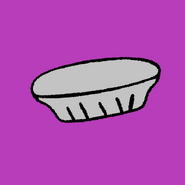 "Umbrellas" by Renoir is where Rain Girl belongs.

"Oriental Promenade" by Paul Klee is where Shape Boy belongs.

"Waiting" by Diana Ong is where Line Man belongs. 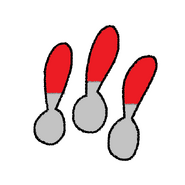 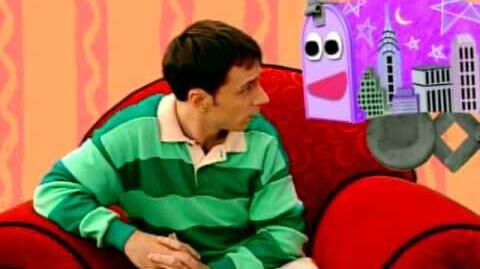