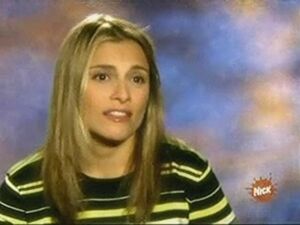 Angela Santomero (born April 26, 1968) is one of the three creators of Blue's Clues. From Season One to Season Four, she was the head writer. Beginning with Season Three, she starting being the executive producer. She has also created the highly successful preschool literacy series Super Why! and the Mister Rogers' Neighborhood spinoff Daniel Tiger's Neighborhood (both produced by Out of the Blue Enterprises). Before Blue's Clues, she first started working on Nickelodeon in 1993 as a researcher and content manager for the first two seasons of Gullah Gullah Island and Allegra's Window, both Nick Jr. shows that were filmed at Nickelodeon Studios in Orlando, Florida.

Retrieved from "https://bluesclues.fandom.com/wiki/Angela_Santomero?oldid=116306"
Community content is available under CC-BY-SA unless otherwise noted.