What else does Blue want to paint in her picture?

A Door
A Window
A Roof

"Blue Goes to the Beach"
"Adventures in Art" is the seventh episode of Blue's Clues from the first season.

Blue and Steve are ready to begin painting. We play Blue's Clues to figure out what else Blue would want to paint in her picture. Along the way we label and mix colors, construct a boat out of shapes with the Felt Friends, and visit an art museum where we sequence a set of pictures on display.

Today, Steve and Blue exploring art in many forms. Steve and Blue enjoy painting and Steve has painted a picture of Blue, and Blue's painted a nice outdoor scene but wants to add something to it, so we play Blue's Clues to find out what it is. Steve finds the first clue on a door and draws it in his notebook. Later, we help her out with painting her wagon when she finds that she does not have the colors that she wants. We, along with paint drops, help her out by showing that mixing two colors can make a new color. We also help out a color of felt friends to use shapes to make a bigger sailboat. Steve finds the second clue on a window and draws it in his notebook.

In the Mailtime segment, Mailbox tells Steve there is a paw-print on the window and Steve explains that it is one of Blue's Clues. In the letter, a group of kids makes things out of clay. One of them crafts a piece of clay with eyes, arms, and more and makes it into a snowman. Later, they skidoo into a picture of an art museum, where we learn that pictures can tell a story. Unfortunately, the story that the pictures represent is not in the right order, so we use logic to get all the pictures back in the right place. Soon after, Steve finds the third clue on the roof. He draws it in the notebook and Skidoos back home to put all three clues together.

The clues were a door, a window, and a roof. Steve thought it was a car. A car does have a roof, a door, and a window (although not in these specific forms) but the answer to Blue's Clues was a house. After figuring out Blue's Clues, they return to their paintings. While Blue adds the house to her picture, the paint drops help color it in, the felt friends float by in their sailboat, and the chick from the museum pictures pops out from the window. Steve sings the So Long Song and the episode ends. 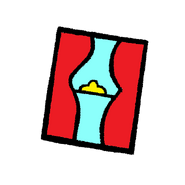 3 Clues from Adventures in Art 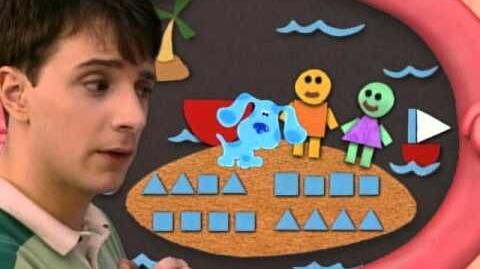