Who is the surprise guest coming to Joe and Blue's apple juice party?

A School
A Person
Tall

Dress Up Day (Broadcast/Credit Order)
Contraptions! (Production Order)
A Surprise Guest is the sixteenth episode of Blue's Clues from season 5.

Blue is preparing for a special guest. Joe and Blue teach the viewers where everything belongs.

Joe and Blue are expecting a surprise guest, so to get ready they clean The Blue's Clues Room, with the viewers' help in putting things away in the proper places. In the Skidoo segment, they visit Blue's school and help Orange Kitten, Green Puppy, and Duck put away the toys to get the school cleaned up. Back at the Blue's Clues house, they set up a party for the guest.

3 Clues From A Surprise Guest 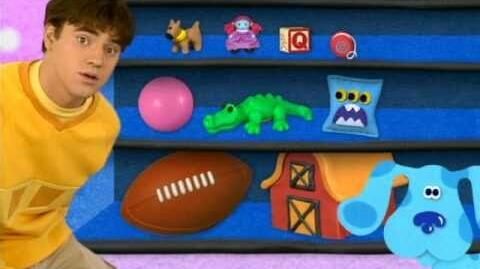