What does Blue want to do in the snow?

A Carrot
A Hat
A Snowball

Blue's Snowy Day Surprise
"A Snowy Day" is the tenth episode of Blue's Clues from the first season. It was the ninth episode aired in the United States.

"It's a snowy day and we need to figure out what Blue wants to do in the snow. As we find her clues, we also match snowflakes with Mr. Salt and Mrs. Pepper, help a Calendar Friend fix her mixed-up weather picture, and help Steve remember what's missing on Blue as she gets ready to go outside."

It is a snowy day and Steve and Blue are going outside to play. They play a game of Blue's Clues to figure out what Blue wants to do in the snow. The first clue was a carrot. Later on, they observe snowflake patterns with Mr. Salt and Mrs. Pepper. In the Skidoo segment, they help a calendar girl to fix the scene depicted in a calendar picture to match the winter season. After skidooing back home, Steve finds the second clue on a hat. We also help Blue to figure out what she is missing when she loses some winter clothing items while trying to get dressed to get ready to go outside. Mailbox comes inside to deliver the mail and shakes the snow off. Some get on the thinking chair. In the letter, some kids were making paper snowflakes. Not long after that, Steve finds the third clue on a big snowball. Steve draws it out and returns to the thinking chair to put all three clues together. The clues were a carrot, a hat, and a snowball. Steve thought that they could put the snowball in the hat and have a snowball sundae with a carrot on top. That was a silly answer. The viewer studied the three clues and thought making a snowman was a better idea. After figuring out Blue's Clues, Steve and Blue head outside to make a snowman. Mr. Salt, Mrs. Pepper, Calendar Girl, and Tickety Tock helped decorate it. After that, Steve sings the So Long Song and this episode ends. 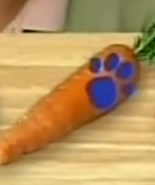 Steve listening in the Kitchen like Mr. Salt and Mrs. Pepper. 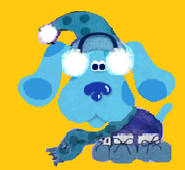 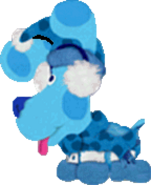 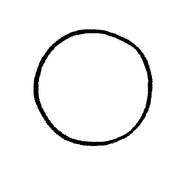 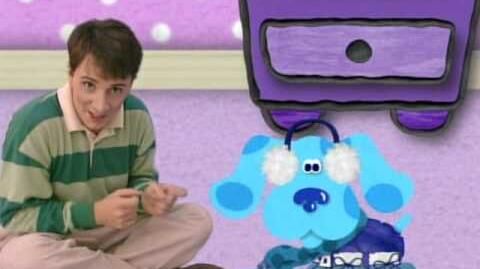