The 100th Episode Celebration is the 31st episode of Blue's Clues from Season 5.

This is marked as a special. This means the series reached 100 episodes as the previous episode was the 100th episode to air.

The Places We've Been

The Laughs We've Had

All Episodes Thrown Back (in Production Order)

Mr. Salt is the host

Steve is the special guest.

Steve and his sock puppet 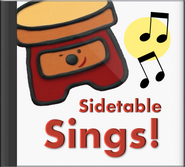 A Brand New Game: Joe is in Little Bo Peep's Farm from Up, Down, All Around! and not in the felt board while pretending to be a bouncing cow looking through a telescope. Blue and a Felt Friend weren't shown in this scene as well.

Math!: Steve is at the entrance of the Present Store instead of near the cash register when counting his Blue Dollars (this scene was after he bought a new crayon). Blue and Cash Register also weren't shown in this scene.

I'm So Happy: Blue wasn't shown when Joe was saying that the viewer was being so smart that makes him happy.

Dress Up Day: Joe isn't in the living room when he tells the viewers to watch this while holding all the clothes.

Colors Everywhere: Joe is in the bedroom and not in the living room when he says, "Orange you glad I changed my shirt?"

Dress Up Day: Joe is in the plant book from "Let's Plant" instead of the living room while pretending to be an explorer.

"A Brand New Game": Joe is in front of the 3 houses in the storybook from "Blue's Predictions" instead of the living room when he says, "Presto Change-Joe!".

Numbers Everywhere!: Numbers 0, 1, and 2 were already pasted on three boxes where the stuffed dolls were in when Joe passes them. Also, a paw print wasn't seen on the number 0 representing the 1st clue (0 is also the 3rd clue).

"A Brand New Game": Joe isn't in the living room when he shows the viewers a silly hat during the Presto Change-Joe Game.

Dress Up Day: Robot Joe is in the game showroom from "Look Carefully..." instead of the living room when he says, "Greetings, I am Robot Joe."

Joe's Surprise Party: Joe isn't in the living room while he dances and sings "Happy Birthday to Me". Blue also wasn't shown in this scene.